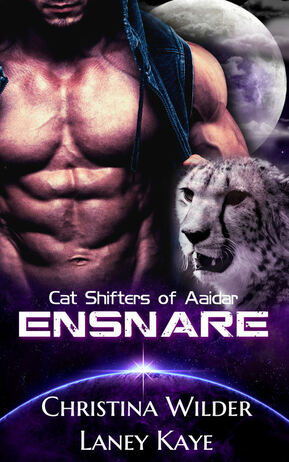 
​I've been captured and imprisoned.
To escape, I must bond with a
cocky, alien cat shifter warrior.
I'll do it, but he won't get past the
walls surrounding my heart...

Lyrie: I have three secrets, but I'll share one with you. I'm falling for Khal, a Cheetakin shifter. But I won't--can't--let anyone know how I feel. Because, if the Regime who holds me captive discovers there isn't anything I wouldn't do to keep Khal safe, well, they'll use my love against me. Use him to break me.

I must escape the compound and cross the desert to reach the relative safety of the Resistance. Before it's too late. If I don't get away, they'll force us to come together, then steal the child we make for their evil experiments. Turn an innocent baby into a monster. So, I'll fight my growing love for Khal and somehow, resist his touch.

Khal: There are secrets in my past. Things no-one outside my band-of-brothers will ever know. Guns, fangs, and claws for hire, the guys and I are tight, and I know they'll never judge me for what I did. They don't need to. I judge myself.

And that's why I have to be alone. That's why I can't allow Lyrie into my heart, into my life. Because loving her means death.
​But not necessarily for me.

Book 3 in a 4-book Series. Our alien shifter sci-fi romance series guarantees alpha males, fierce women, steamy, on-the-page romance, and a satisfying happily-ever-after. Each book features new characters, but a larger story weaves through all 4 books. They can be read individually but are best when read in order