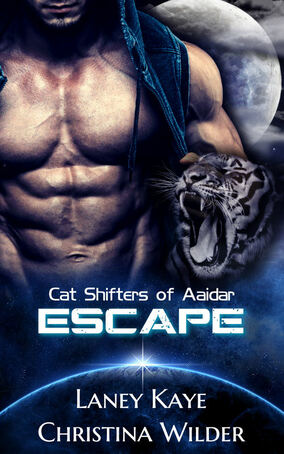 
Can an alien shifter and a human find a way to be together on a planet torn apart by war?

I have three goals.
Infiltrate the enemy compound.
Rescue my sister.
Escape into the desert.
Not bond with a hot alien cat shifter warrior.

Herc: A cat shifter mercenary--gun, fangs, and claws for hire--doesn't fall for a pretty little human. It's cost the Regime big-time to have me and my guys hunt down the Resistance fighters skulking in caves spread across this gods-forsaken planet. My sole focus here is this deployment. Until Maya touches me, igniting the first phase of a bondmate.

It doesn't matter how freakin' sweet she is. How sexy. No way in all seven hells will I complete the three bonds. As long as I don't kiss her, we won't hit second base. And I'll be damn sure to keep my hands off her incredible body, because having sex with her would bring on bond three, linking our souls for eternity. Problem is, now it's not just my damn life that's in danger. My heart is in all kinds of trouble.

Maya: Herc has to believe I'm nothing more than a nurse working for the Regime. If he finds out I've infiltrated the military compound to rescue my imprisoned sister, my life's in danger. He may be the hottest guy I've ever seen --shifter or man--but I refuse to bond with someone who's hunting my people into extinction.

Now that my mission's accomplished, I can flee into the desert. He'll never find me once I'm hidden in the Resistance stronghold. Problem is, Herc's hot on my heels. If he catches me, will he return me to the Regime? Or does he have his own--very personal--plan for me instead? Hooking up with me will ruin Herc's career and make him an enemy of his own people. But if he hands me over to the firing squad, the bullets won't need to hit my heart to shatter me into a billion pieces.


Caution: Some cliffhanger endings.Guns, fangs and claws for hire, Herc’s the alpha of a big cat shifter mercenary team, fighting for the Regime. When nurse Maya tends his wounds, her touch on his near-naked body triggers the first phase of an impossible bondmate.

There’s no way in all seven hells Herc will bond with a puny human—despite her alluring curves and feisty attitude. He's not going to kiss her, so bond two, the meshing of their hearts, will never happen. And sex is totally off the table - or the bed, or any other damned place. So bond three, the irrevocable joining of their souls, isn't a concern...as long as he never sees her again.

A Resistance fighter, Maya infiltrated the Regime to save her captured sister. Her slash-and-burn plan doesn’t include bonding with a sexy mercenary shifter who’s hunting her people into extinction. But when her secret identity’s revealed, she flees into the desert with Regime soldiers—and a determined Herc—hot on her heels.

If he catches Maya, Herc faces a lifetime on the run from the Regime. But giving in to her heart’s desire will bond Maya to her enemy.


Note to readers: Book 1 of a 4-book Series. Our alien shifter romance series guarantees alpha males, fierce women, steamy, on-the-page romance, and a satisfying happily-ever-after. Each book features new characters, but a larger story weaves through all 4 books. They can be read individually but are best when read in order.